A Zalgo text generator can make a boring text into an engaging one by messily adding Unicode symbols.
The Zalgo text generated by this tool can be used to make your postings more interesting and attractive.
You can surely use this text for commenting, description writing, and for many purposes.

This Zalgo generator has an attractive interface because being simple is being attractive, you can easily generate the Zalgo text by using this tool by textreverse.

There is more than one option to input the text and the copying of results are very easy.

How to use this Zalgo text converter?

You can generate a Zalgo text, copy-paste it by following the few steps discussed below.

Zalgo text is somehow similar to the "glitch text" but you can see the slight difference between the two in the below image: 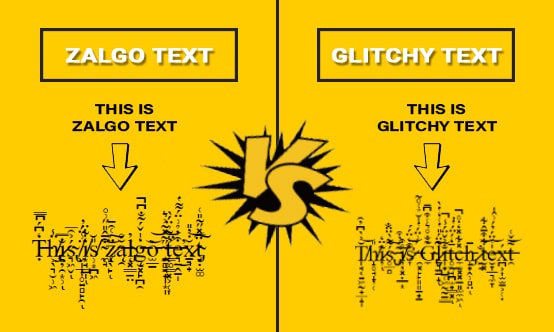 You can also use our cursive text generators to give a stylish look to your writing.

Why this Text Zalgo Generator?

By having a look at the below-discussed features, you can determine how helpful this Zalgo text converter is, for generating a Zalgo text.

This Zalgo text generator is free which means no cost is required for using this tool or even for signup.
You can search the Zalgo generator and you are all set to get the engaging text that can be used anywhere.

There is no need of investing too much time, you’ll get the Zalgo text in the output fields as soon as type something in the input field.

You don’t need to press any button for getting the results.

Before entering something in the input field, you can load an example text for getting an idea about what to type in this field.

You can load this example text by clicking on the “sample load” button.

For getting a Zalgo text, a few steps are needed and this is because of the easy interface of the Zalgo generator.

Where we can use a Zalgo font?

You can use a Zalgo text while writing a post description of anything that is going to be published on social media.

This text generated by a Zalgo font generator can be used in personal messages just to make it more engaging.